Our journey begins at ally Pally, the “People’s palace”, a venue where the likes of Led Zeppelin, the Rolling Stones and The Who have all played, and many more besides. It’s an early meeting time of 8am within the private grounds of Alexandra Palace so you have time to make any final adjustments to your bike (provided by us) and load your bags onto the support crew van. The views across London from here are stunning. Our route takes us quickly out of London along back roads and cycle routes including a flat traffic free trail through Lee Valley Park. The rest of the day is undulating.

Cycle into rural Hertfordshire with great views across the Chilterns then a leisurely lunch stop at for lunch. Rest and relax then spend the afternoon cycling along country lanes, through quiet villages all the way to our first overnight stop at Luton. After dinner and briefing from the support crew, everyone heads to the hotel bar for metal talk and bonding over a bottle of Trooper beer on this first evening.

Reasonably early start, as it’s the longest and toughest ride of the challenge. We’ll take our time, make the most of the long June daylight hours and take regular breaks every 20km or so. Prepare for a long day in the saddle. We head out of town towards Northampton passing meadows, back roads and cycle paths, through quiet villages such as Paulerspury, said to be the site of Boudicca’s battle. We criss-cross the ancient trackway of Watling Street, which the Romans later paved.

For much of the morning we cycle parallel to the Grand Union Canal. After lunch at the 17th century village inn known as the Saracen’s Head, we face the toughest sections of the day. Some long hills test our mettle directly after lunch. Skirt Towcester race course, following designated bike paths as we approach Leicester, bringing us to the end of day 2. Time for a well-earned rest, dinner and briefing. 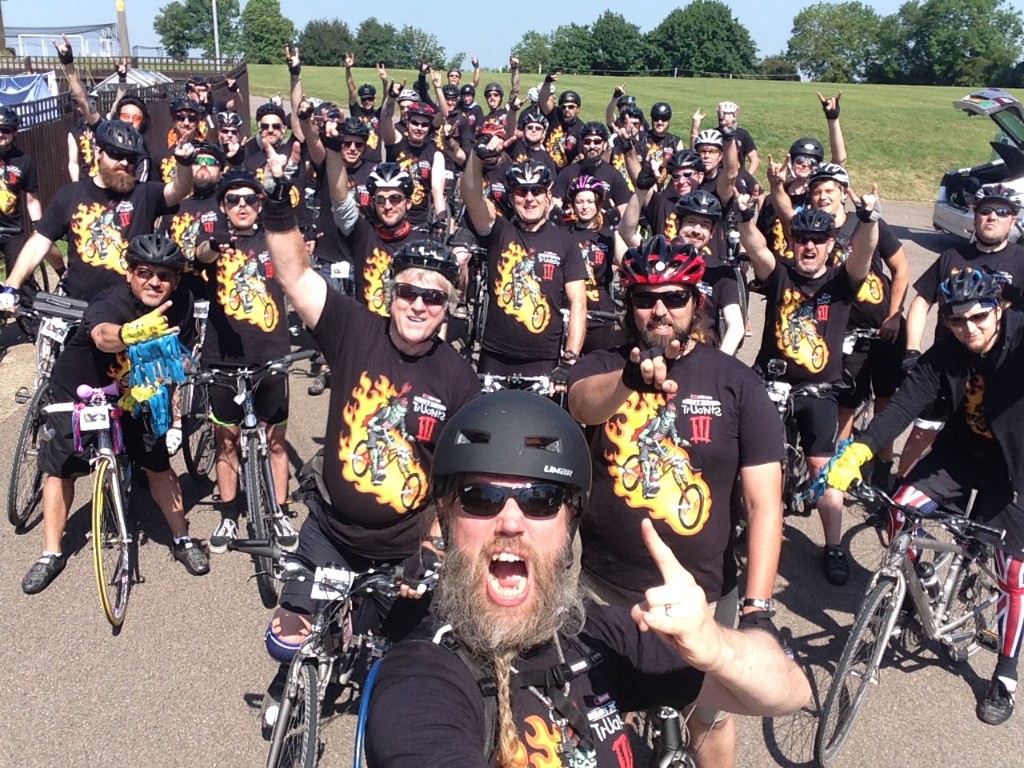 Final day of the ride and the aim is to arrive at Donington Park by midday. The route sticks to small roads through the green and rolling countryside, mostly gentle ascent for the first part and then down for the second. Regroup to ride the last few miles together. The ride finishes with a celebration. Say goodbye to your bikes, and then after an hour or so head for the festival (tickets not included). 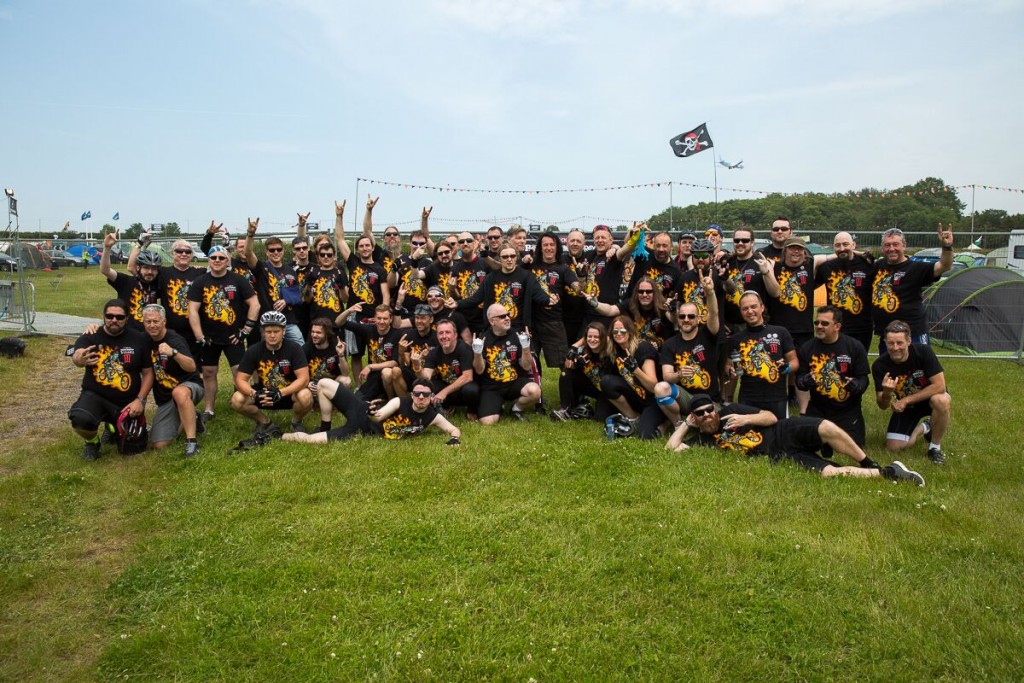 Taking part in a charity challenge is a big commitment and we want to make sure you’re fully prepared. Here’s a round up of our most frequently asked questions.

WHAT IS THE AVERAGE AGE?

It is impossible to give an average age. This challenge appeals to people from all age groups. Riders have been aged between 18-66 and have travelled from all corners of the globe to join us.

Everyone who signs up for London to Download charity challenge has two things in common – a love of metal and the desire to help those less fortunate. People from all walks of life take part which makes for an interesting and diverse group of fellow participants. Most people who sign up for the first time don’t know anyone else beforehand, there will be the opportunity to meet other participants at one of our pre-ride Socials at the Crobar plus you can join Facebook, Instagram and follow us on Twitter. The reason why we have so many repeat riders is because there is a fantastic camaraderie, and that includes Rookie riders.

HOW FIT AND HEALTHY DO I HAVE TO BE?

This is an extremely challenging ride, the distance is 164 miles, with the second day being an immense 84 miles. It is a long distance ride, a marathon not a sprint and not a race, we’re all there to support each other, to reach Download safely and have fun along the way. You will need to undertake a regular physical training in the weeks leading up to the event to reach the level of fitness this challenge requires. If you are over 65 you must obtain a signed medical form from your doctor. It is essential that Classic Tours are aware of any medical conditions that may be affected by participating in the event so that the supporting paramedic is aware. Note too that there will be a time cut off for each day, anyone struggling with the group pace will be politely asked to take some tactical breaks in the support van so that we reach our overnight hotel in good time and safely.

HOW MANY PEOPLE TAKE PART?

We limit our group to a maximum of 60 riders. You are joining an exclusive event and every place is approved after serious thought. Each rider is asked to raise a set amount of fundraising and is expected to exceed this target.

Heavy Metal Truants was established in 2013 to fundraise for three charities who support services to children in the UK : Nordoff Robbins Music Therapy, ChildLine/NSPCC and Teenage Cancer Trust.

WHAT FUNDRAISING HELP WILL I RECEIVE?

Raising funds is one of the toughest parts of a charity challenge. However, it is possible to reach and even exceed the sponsorship target as many participants have proved. On the Heavy Metal Truants’ website there are ideas to give you some inspiration. Our core of regular participants can also offer you their top tips.

WHAT HAPPENS IF I CAN’T RAISE THE SPONSORSHIP MONEY?

You are asked to raise a minimum level of sponsorship, this is because part of your sponsorship will contribute towards the cost of the tour (together with your registration fee) and the remainder will be a direct valuable income for the 3 charities we support. If you cannot raise the sponsorship money, you can make up the shortfall yourself in order to still take part. If you are having problems raising money do let HMT HQ know well before the sponsorship deadline so that they can offer help and advice.

HOW MUCH OF THE MONEY I RAISE WILL DIRECTLY HELP THE CHARITY?

Charity challenges incur costs for travel, accommodation, food, staff etc., the registration fee contributes towards these costs, the balance is covered by your sponsorship funds unless you choose to cover the balance personally and all funds raised above this will go directly to support the three charities.

WHAT IF MY SPONSORS THINK MY CHALLENGE IS A HOLIDAY?

The challenge of taking part starts months before departure due to the fundraising and training involved. Once on the challenge the physical exertion of cycling long distances and being in the saddle for up to 8 hours a day is not to be under-estimated. The experience is often outside most people’s comfort zone. However, the personal satisfaction of overcoming these physical and emotional barriers and benefiting the three charities we support is fantastic.

WHAT DOES THE CHALLENGE INCLUDE?

Shared accommodation, full board, water and snacks, luggage transfer, bikes, all necessary back-up including support vehicles, Tour Manager, mechanics and paramedic. We suggest you bring around £50 spending money to cover drinks and tips.

DO I NEED SPECIALIST KIT?

The Heavy Metal Truants website holds all the information you will need for this challenge, but we’re happy to help at any stage. We provide a suggested packing list which recommends the type of clothing and equipment you will need. The main essential item is a cycle helmet, this must be worn at all times when riding.

DO I NEED INSURANCE?

If you are a UK resident, medical insurance is not necessary. For those bringing their own bicycle, they should check their household insurance policy or take out separate cover. If you are travelling from abroad please notify your travel insurance that you will be participating in a charity cycle challenge and check that this activity is covered by your policy.

WHERE WILL WE STAY?

We will stay in hotels which are suitable for groups and can accommodate our bicycles. Rooming is usually twin or triple share and is single sex.

WILL I HAVE TO CARRY MY LUGGAGE?

No, luggage will be transported in support vehicles. Small bum bags are useful for carrying personal items with you.

The food will be wholesome, tasty and plentiful. Every year we enjoy a hearty lunch at two pubs along the way. They welcome us with open arms and feed us well which sets us up with enough energy to keep going after lunch. In Leicester we enjoy a curry, a welcome end to our toughest cycle day. If you have a special dietary request please let us know and we will do our best to accommodate it.

All riders will receive a VIP ticket for the Friday at Download. We do not provide tickets for the weekend.

Yes, Hybrid bicycles are supplied for every rider. Our mechanics can fit any extras you wish to bring with you such as your own saddle, bar ends or pedals. You may choose to bring your own bicycle, just remember to insure it and bring a bike lock. There are no bike lock facilities at Download, please plan ahead for this if you’re bringing your own bike.